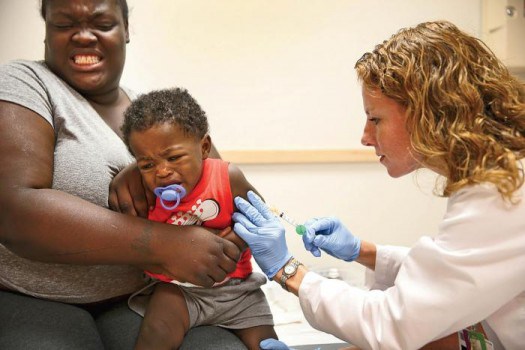 Flu Shots And Other Vaccines Are Made To Kill African-Americans Americans were told that these vaccines were one hundred percent safe. Everyone trusted the Center of Disease Control (CDC), along with multiple other vaccine producers and distributors, with their lives without a doubt.

Many governmental facilities, professional jobs, private/charter and public schools would strongly request that all men/women and children are required to be vaccinated. Their claim to the public and employees alike, is that the vaccines can prevent a variety of different diseases and viruses from incurring.

Doctors are heavily trained to indulge pregnant women, who are labor ready, with painful information about the horrifying consequences of not taking strongly recommended vaccines for both her and the newborn’s sake. Doctors forcefully shove reasons why the newborn baby must have these vaccines, directly after birth, down the parent’s throat.

Doctors and nurses will quickly setup “follow-up” days for the newborns to return to the doctor’s office for even more vaccines, just a few days later after the child’s birth. It is done this way to allot more time for the CDC to transfer the vaccines to the hospitals and clinics.Keeping this process on a strict scheduling bases helps the Census Bureau to maintain an emaculant recorded account of how many US citizens were vaccinated. Doctors are required to highly recommend vaccines to African-Americans

Nearly all schools require students to be vaccinated before the start of the school year. Requesting parents/guardians to show shot (vaccine) records of all returning students and all incoming new students. 99% of the parents/guardians of these students are unaware that these shots, or rather vaccines, are not a federally mandated requirement to attend any school in the US.

While we’re at it, it is also not a federally mandated requirement for newborns, men, women and children to be vaccinated in the US. Every citizen has been manipulated into the belief that these vaccines are safe and can prevent diseases and viruses from arising in one’s lifetime. That’s about as true as President Barack Obama being the very first Black President of the United States of America.

In this video below, Robert F. Kennedy Jr., relative to John F. Kennedy, sheds a big bright light on the answer to this question. YouTube has been removing this video off of its platform numerous times, so hopefully you can see my latest upload of it below at this time. I have since edited the video by shorting its length, but I will upload part two to this video shortly. Watch part one here.

Robert F. Kennedy Jr exposed and explained why the Flu Shot vaccines, and every other vaccines alike, are blatantly killing African-Americans. This video was played live during the lastest Million Man March, in Washington, D.C., in front of millions of African-Americans. I strongly believe that no one got this message crystal clear, because if they did understand it, then you would think that the conversation would be about these vaccines killing African-Americans, right along with the unjustly racist police officers murdering our fellow people constantly in America. But their overall agenda is bigger than a race war. More about that later in a different article.

Vaccines Have Mercury And Cause Autism? Dr. Brian Hooker says that the CDC has been covering it up for years, when it comes to the relationship between the age of the first MMR vaccines and Autism.

The second part of this video will go into heavy detail about who leaked this information about these vaccines being deadly etc., who started this all and more. I believe the second half of the video is the reason why it is being consistently removed from YouTube. Keep checking back here to watch part 2 of the Robert F. Kennedy Jr video.

Kennedy mentioned a very important “Whistleblower” who is very relevant to this matter of these deadly vaccines like the Flu Shot. His name is Dr. William Thompson, the Senior Scientists at the CDC’s vaccine division. Thompson went on public record to confess what he was responsible for, while under orders, that caused thousands of deaths in the African American communities. Listen Closely! Audio of Dr. William Thompson confessing what he was ordered to do as the Senior Scientists at the CDC’s vaccine division

(CHECK BACK HERE, I WILL BE UPLOADING THE AUDIO TAPE SHORTLY)

In this video below, you will learn more about the Senior Scientists turned Whistleblower Dr. William Thompson of the CDC vaccine division, and what happened that made him have a change of heart. Exposing the absolute truth about vaccines, especially the Flu Shots and the MMR vaccines, and how they have affected thousands of African-Americans to the point of it causing their deaths. Listen Closely!

Well after the most recent Million Man March, host of the MMM and leader of the NOI (Nation Of Islam), Louis Farrakhan explains why flu shots and other vaccines are killing African-Americans, in an 2016 interview with Power 105.1’s The Breakfast Club. Listen very closely! Click Here

Louis Farrakhan with The Breakfast Club at Power 105.1 radio station

Farrakhan explained what Robert Kennedy personally informed him of concerning the vaccines given to African-American children and pregnant women and men.


The Aftermath Of The March On CDC

Protestors marched to the CDC – Center of Disease Control in Atlanta, Georgia to demand these accountable records of proof be made public; that indicated that the Flu Shot, and every other vaccine alike, are killing African-Americans, as instructed by Robert F. Kennedy Jr and Louis Farrakhan. Watch the video below.

NaturalNews.com reported that the recent lab tests conducted at the Natural News Forensic Food Lab found that seasonal flu vaccines, which are pushed on virtually everyone these days, including young babies, pregnant women and the elderly, contain outrageously high levels of neurotoxic mercury. Vials of batch flu vaccine produced by British pharmaceutical giant GlaxoSmithKline (5) were found to contain upwards of 51 parts per million of mercury, or 25,000 times the legal maximum for drinking water established by the Environmental Protection Agency (EPA).

This shocking discovery was made using advanced mass spectrometry technology with incredible accuracy, filling the gap left by the nation’s regulatory agencies that have failed to conduct this type of safety testing themselves. Millions of people are injected with flu vaccines annually, and most of them are completely unaware that one of the most toxic metals known to man is being implanted directly into their muscle tissue unabated.

“Mercury is one of the most poisonous substances known to mankind,” explained Dr. David Brownstein, a board-certified family physician and holistic medicine specialist, on his blog. “For over twenty years, I have been testing nearly every patient seen in my office for heavy metal contamination. … I have found that over 80% of my patients, both healthy and sick, have mercury toxicity.” – Dane Calloway

Police Brutality & Racism Were Bypassed By Both Candidates previous post