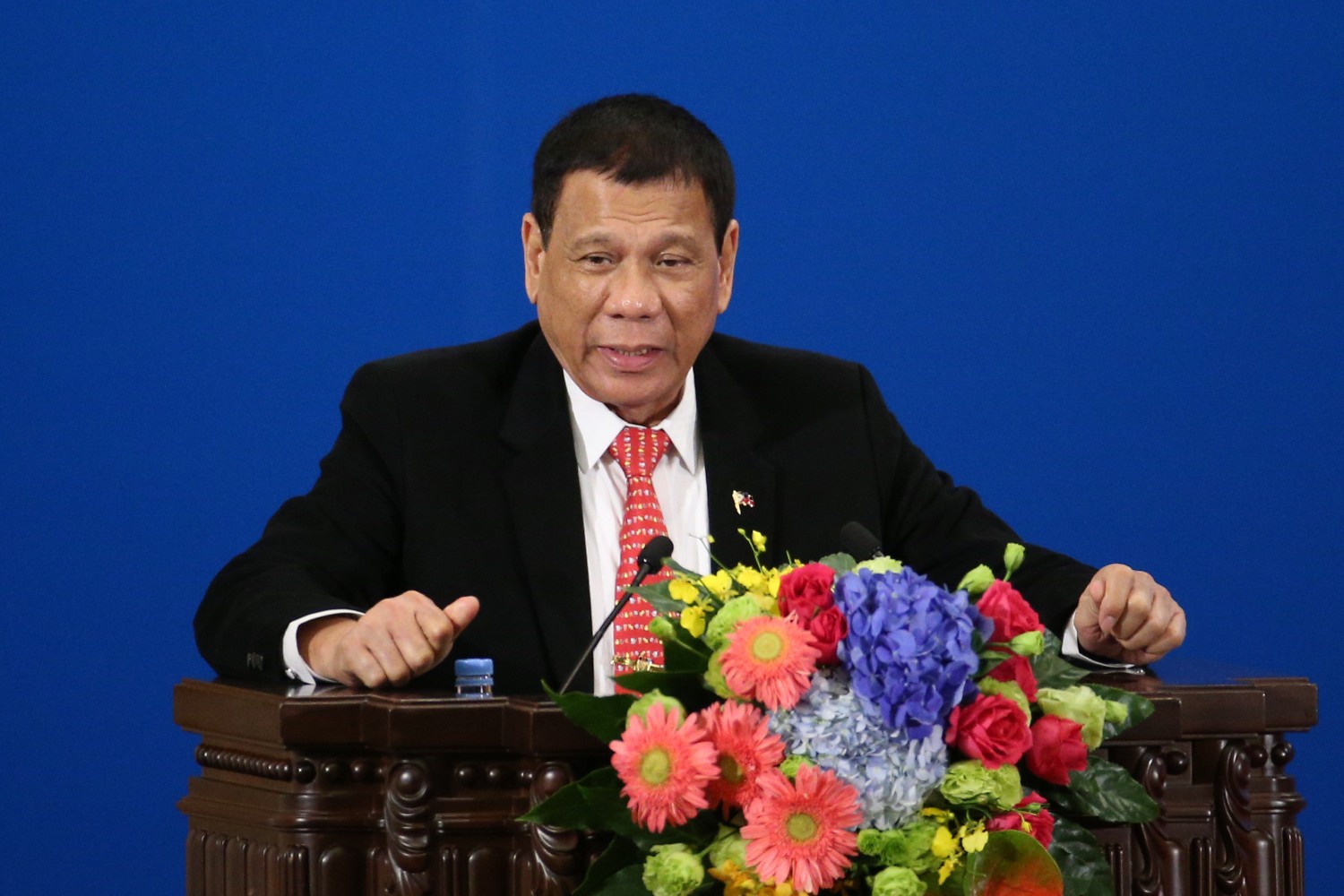 Controversial Philippines President Rodrigo Duterte has been criticized for his violent campaign against crime, but it is the former mayor’s foreign policy overhaul that is shifting tides in the South China Sea. On Thursday, Duterte made explicit a threat he has been brandishing for months: that he would break a historical alliance with the United States and align his country with China and Russia.

Ties with the United States became strained after Duterte unleashed a bloodbath in the Philippines by encouraging police to kill drug dealers. The campaign drew criticism from the Western world—which Duterte met with defiance and a pledge to turn towards Russia and China.

During his first 100 days in office, Duterte halted joint U.S.–Philippines patrols, demanded that U.S. Special Forces leave the region, and threatened to end a decades-old alliance with the United States. He has also dared the United States and the European Union to stop providing aid and said he would go to Russia and China for arms and development funds.

Duterte surprised observers Wednesday by pleading for aid in a rash of interviews with Chinese state-owned media during his trip. Speaking in the Great Hall of the People in Beijing on Thursday, Duterte made his position official. “I announce my separation from the United States,” Duterte told an audience of Chinese and Philippine business people that included Chinese Vice Premier Zhang Gaoli.
“I’ve realigned myself in your ideological flow and maybe I will also go to Russia to talk to [President Vladimir] Putin and tell him that there are three of us against the world—China, Philippines, and Russia. It’s the only way,” Duterte said, according to Reuters.

The announcement was a culmination of a trip to China that saw the hosts giving a warm welcome, while Duterte made a concerted plea for support. China had previously voiced support for Duterte’s war on drugs.

Since Duterte’s election in May, over 3,000 alleged drug dealers have been killed with over 1,500 of them dying in guns battles with police, according to Time. Duterte has encouraged a shoot-to-kill policy and said he would be happy if police killed as many as three million drug addicts, likening his campaign to the Holocaust.

The extra judicial killings have been condemned by international rights groups and Western countries, including the United States. Duterte, dubbed “the Punisher,” responded by using profane language when referring to U.S. President Barack Obama and saying Obama could “go to hell.” Closer Ties with Russia and China

The United States has been a key supplier of aid and arms to Philippines for decades but Duterte has said he can get weapons elsewhere.

“I sent the generals to Russia and Russia said ‘do not worry, we have everything you need, we’ll give it to you,’” he said on October 5.

“And as for China, they said ‘just come over and sign and everything will be delivered.’”

While the bluster and cowboy swagger may have populist appeal domestically, analysts say Duterte is in way in over his head in dealing with China. “It’s very clear that the Chinese are going to exploit this to the hilt,” said Dr. Malcolm Davis, a senior analyst with the Australian Strategic Policy Institute (ASPI). “They will play him like a violin.”

“They will get all they can from him and that could completely undermine Western strategic posture and policy in regards to the South China Sea,” he said. The stakes are high in the South China Sea. In a landmark decision in July, an international tribunal ruled in favor of the Philippines and against Beijing in a territorial dispute over the West Philippines Sea region of the South China Sea. Chinese officials have refused to acknowledge the decision and continue to prevent Filipino fishermen from accessing Scarborough Shoal, an area in Philippine territory.

Duterte told media he would not be raising the tribunal ruling during his current trip and has been deferential while in China, saying he would not even raise fisherman access unless Chinese leader raised it first.

“I have to be courteous, I have to wait for your president to mention it in passing for me to respond,” he told reporters there on Wednesday.On Thursday, he said the two countries would work together to resolve the issues.

Depending on how that is done, Duterte could run afoul of his country’s highest court. On the eve of his trip, a Filipino Supreme Court judge warned Duterte that he could be impeached if he ceded any Filipino territory in his meetings with Chinese authorities. “He is correct. I would be impeached,” Duterte told reporters at the Davao international airport on Oct. 16. But Duterte told local Filipino officials on Oct. 10 that he can do little to defend Philippine territory against China. “Let’s not dwell on Scarborough Shoal because we don’t have the capabilities,” he said. “Even if we express anger, it will just amount to nothing. We can’t back it up.”

Historically, the United States and the Philippines have strong economic and military ties. According to InsideGov, the U.S. gave just shy of $200 million in 2012 with the largest amount, $31 million, going to military assistance.

The Philippines is also party to a Mutual Defense Treaty through which its armed forces get equipment and intelligence from the United States. Since Duterte seems to have passed the point of no return in his pivot away from the United States and towards Russia and China—as said in September he would do—this history will be abruptly irrelevant.

“If that relationship goes then the military is cut adrift. All that goes out the window,” Davis said.

Adapting to Chinese or Russian weaponry will be unappealing for the Philippine military and Duterte plays a dangerous game if he rattles them too much. The Philippines has a long history of military coups, though the previous government of former president Corazon Aquino created relative stability.

Davis believes Duterte’s kowtow to China is like “a bad poker player with a bad hand…He is going to lose.”

While there may be arms deals, it is unlikely China will be interested in contributing any more than it has to help to with any insurgent movements in the south, Davis said.

With the Chinese so focused on gaining strategic control in the South China Sea and driving a wedge between the United States and its allies, Duterte is playing right into their hands, he said.

“They are taking him for everything he’s got.” – Dane Calloway